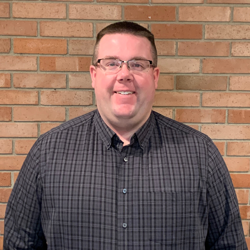 Tom grew up moving around the country with his parents due to his father’s job. He has lived in several different states but always will consider Ashby, MN to be his hometown. Being around people who are hard working and maintain solid core values is what brought Tom to the Ag Industry after growing up around but never in it his whole life.

Tom graduated from Minnesota State Moorhead in 2004 with a degree in Biology but decided he was not finished with his studies so he got his MBA from North Dakota State University in 2005. He worked as a life flight paramedic while finishing college but left that role to join Centex Harvest States upon graduation.  He spent 12 years with CHS growing his knowledge and skills in regards to grain merchandising.

In December of 2019, Tom joined the Hurley & Associates marketing team in the Wheaton, MN location. Tom’s knowledge of grain handling and elevator merchandising will be very beneficial in his future success with Hurley & Associates. He believes that helping farmers make better decisions will in turn benefit the entire community and all in it.