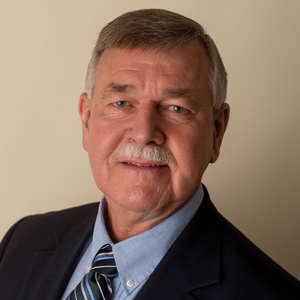 Ed Case was born and raised on a small grain and livestock farm in Southern Illinois. He remains active in that same family farm operation today. Ed graduated from Southern Illinois University in Carbondale, Illinois, in 1974 with a Bachelor's Degree in Agricultural Business and a secondary degree in General Agriculture.

Upon graduation, Ed took a job as Assistant Manager with the Farm Bureau Co-op grain and feed elevator in Saratoga, Indiana. After two months, Ed was promoted to manager and stayed there until the fall of 1975 when an opportunity to move back to Southern Illinois presented itself.

In February, 1976, Ed took a position with Behimer and Kissner, which later became Consolidated Grain & Barge in Wayne City, Illinois. Over the next two years, he managed several different areas including a truck in - truck out grain handling facility and the seed division.

In 1985, Consolidated Grain and Barge transferred Ed to a grain handling facility on the Ohio River in Mt. Vernon, Indiana. This was a regional office for a network of interior grain origination and handling facilities, most with rail capabilities. Ed assumed the responsibilities of trading the rail position for these facilities, as well as purchasing the input ingredients and managing logistics for a pellet mill operation at the Mt. Vernon, Indiana facility.

In 1986 Ed transferred to a managerial position with Consolidated Grain & Barge’s at a grain handling facility on the Mississippi River in Cape Girardeau. In 1987, he transferred to his last position with Consolidated Grain & Barge at a grain handling and product transfer facility on the Ohio River in Mound City, Illinois. This was also a regional office for a network of ten other grain handling facilities which marketed over 40 million bushels of grain per year, as well as handling an additional 1 million tons of terminal business. Ed stayed in this position as the Regional Operations Manager until 1994.

Ed joined the team of Hurley & Associates in 1995 as a Marketing Consultant and has become one of our leading consultants. Ed now lives in Cape Girardeau, Missouri, with his wife Sue. They have raised two daughters and also have three granddaughters and a grandson.